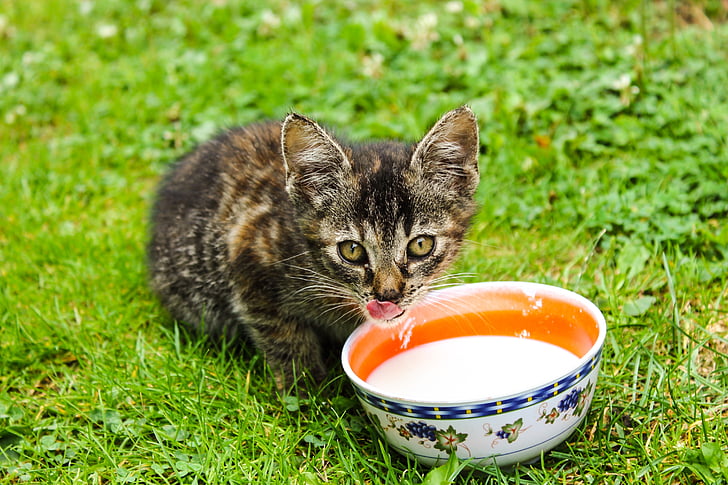 Cats are not people, even though many of them seem to think they are. As a result, they can’t do many of the things we can do, such as play baseball, format spreadsheets and tolerate certain foods. In fact, some seemingly harmless foods can wreak havoc on a kitty’s system and cause a whole lot of unnecessary damage. Assuming you prefer a happy, healthy cat over a grumpy, sick one, you should keep them away from these 10 foods:

If cats could choose one food to eat for the rest of their lives chances are they’d pick canned tuna. The strong smell and taste are a match made in kitty heaven – so irresistible, in fact, that some cats refuse to eat anything else. Veterinarians have lovingly labelled these fussy felines as “tuna junkies”. Clearly the little addicts need boundaries when it comes to tuna, especially because too much of it can lead to health problems. Though fish is a great source of protein, tuna contains higher amounts of mercury than other fish. This can lead to mercury poisoning if consumed in large quantities. It also doesn’t contain adequate amounts of Vitamin E, a deficiency that could lead a condition called steatitis (also known as “yellow fat disease”). Unlike human-grade canned tuna, cat food tuna is usually packed with added nutrients, minerals, vitamins and amino acids. So, when feeding your cat tuna it’s best to stick with the cat-friendly formulas. But still make sure to switch it up – variety is the spice of life.

Onions and cats don’t get along and the combination results in more damage than simply burning eyes and cascading tears. Onions can actually break down a cat’s red blood cells, leading to anemia. An occasional small dose may not cause any harm, but ingesting them regularly or in large amounts can lead to onion poisoning. That’s right, onion poisoning. Their buddies garlic and chives should also be avoided as they can cause gastrointestinal upset.

A cat happily lapping milk from a saucer is an image loaded into many of our minds. It just seems so natural and quaint doesn’t it? Well, the jarring reality is that most cats are lactose-intolerant, causing that idyllic cat-lapping scene to be followed by serious digestive upset and diarrhea. Sorry to ruin that one for you.

Grapes and raisins are the perfect size for tiny mouths to snack on; unfortunately, doing so could result in kidney failure. Early warning signs of failing kidneys include repeated vomiting and hyperactivity. Even small amounts can make a cat sick, so it’s best to store your grapes and raisins far away from foraging mouths.

Humans are obsessed with chocolate but cats aren’t big fans – and they have good reason not to be. Chocolate can be lethal for cats due to the toxic agent theobromine. Although all types of chocolate are toxic to cats, dark chocolate and unsweetened baking chocolate pose the most danger. Ingesting chocolate can cause abnormal heart rhythm, tremors and even death. Like you needed another excuse not share.

Raw eggs are not a great idea, period. Food poisoning from bacteria like salmonella or E coli is one pretty good reason. Many of us know how unpleasant that can be. Another reason is that raw egg whites prevent proper absorption of the B vitamin biotin, thanks to a protein called avidin. This can lead to skin and hair issues that aren’t fun to deal with either.

Imagine dough rising in a pan, growing magically into a delicious loaf of bread. Now imagine that happening inside your cat. A bit grotesque, right? Not surprisingly, expanding dough can be extremely painful, not to mention harmful. On top of that, fermenting yeast produces alcohol which can lead to alcohol poisoning.

Caffeine, what would a modern human do without it? Fortunately cats don’t require an artificial boost to get through the day because enough caffeine can actually kill them. Symptoms of caffeine poisoning include restlessness, rapid breathing, heart palpitations, muscle tremors and fits. Caffeine hides in many different foods so make sure to do your research before offering kitty a treat.

Mmmm Xylitol. This chemical sweetener is found in candy, gum, toothpaste, baked goods and some diet foods. Although is tastes delicious (with a name like that, how could it not?), ingesting it can increase a cat’s insulin levels and lower blood sugar. Liver failure can also occur, with symptoms like vomiting, lethargy and loss of coordination acting as early warning signs. Soon after ingesting Xylitol a cat may experience seizures – liver failure occurs just a few days later.

It may seem like Christmas morning when a cat gets to eat table scraps of fat trimmings and bones, but the magic doesn’t last long. Fat can cause an upset stomach, leading to vomiting and diarrhea. Bones are perfect little choking weapons that can splinter and obstruct or lacerate a cat’s digestive tract. It’s like opening your stocking only to find a big lump of coal.